That was the average number of patients enrolled in studies for sarcoma four years ago when Nathalie Criou, a sarcoma cancer survivor and founder of Beat Sarcoma, looked around for new information about her disease.

Criou’s story, told at 23andMe’s headquarters for Sarcoma Community Night on a rainy Tuesday night last week, was a sobering reminder of how challenging research has been into this rare form of cancer. Earlier in the evening, Stanford oncologist and researcher Dr. Kristen Ganjoo told the audience about promising sarcoma treatments, but she also explained that even now clinical trials to approve new drugs for sarcoma routinely shut down simply because they can’t find enough people to sign up.

To the almost two dozen people affected by sarcoma gathered that night, these stories were all too familiar. Sarcoma is rare — only about 12,000 people are diagnosed with it in the United States each year — and extremely diverse, with about 50 distinct subtypes. Each type often progresses differently and can require individualized approaches to therapy, making developing effective treatments for sarcomas very difficult.

“You raise your hand and say ‘does anyone else have this?’ and no one else raises their hand,” explained Carole, who has a rare sub-type of sarcoma.

But what if there was a way to bring together sarcoma patients from far and wide and involve them in research into their disease? For Criou, an advocate and former patient, hearing about 23andMe’s Sarcoma research initiative offered something new.

“We’re talking about a huge difference — we’re talking three [people], or 550,” Criou explained, comparing her numbers from four years ago to the current number of individuals enrolled in 23andMe’s Sarcoma research community. “And it’s 550 people that can come back, that more than one question can be sent to.” But Criou also sees this initiative having a much broader impact.

“I really see this as a great platform for other rare cancers, other rare diseases, and in fact, any disease — it doesn’t have to be rare,” said Criou. “If we can show that a community like sarcoma — which is probably one of the toughest challenges from a research perspective — can use that tool… hopefully it will create a trend for sarcoma, and for other diseases.”

This is the hope for many who have joined 23andMe’s Sarcoma research initiative. While it still has a lot to prove, the initiative has brought together a community of patients who for years felt like they’d been abandoned by researchers and funders.

“When I was first diagnosed, the message I got was ‘there’s nothing anyone can do and you’re in big, big trouble,’” said Robin, a sarcoma survivor. “That was seven years ago and I’m still here. I feel really grateful, actually, that a community is pulling together to try and take a look at this.”

Even though Robin is currently sarcoma-free, she’s joining because she knows how rare sarcoma is and the challenges it presents to researchers. “If someone is willing to study us, I’m more than happy to be involved. It’s such a rare thing that there’s probably not enough money in it to have motivated people to study it in the past, and very little is known about it. I’m a survivor, and I’m here to participate and see what I can do.”

And the initiative doesn’t just offer hope for new research, it also allows interaction between patients and researchers. Indeed, after all of the panelists had spoken the room came alive with questions. Sometimes, the answers came not just from the expert panel, which included UCSF cancer surgeon Dr. Eric Nakakura and Arthur Beckert of the Sarcoma Alliance in addition to Criou and Dr. Ganjoo, but from others in the audience. People asked about the latest research, gave tips on where to find clinical trials, and brainstormed creative ways to leverage this new sarcoma community.

It was perhaps this last activity that best communicated the power and potential of 23andMe’s research community. Everyone was engaged by the possibility of enabling individuals to contribute directly to research — not just once, but continuously, in an evolving, collaborative, and exploratory process. 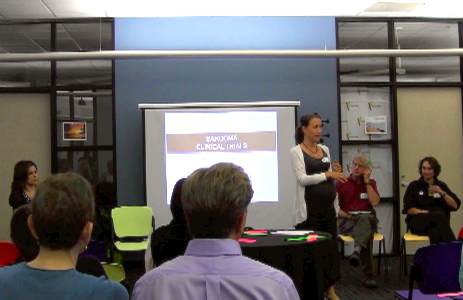 In her comments, 23andMe co-founder and CEO Anne Wojcicki emphasized the collaborative nature of 23andMe’s research communities. “The whole purpose of 23andMe is to give everybody who has something they’re passionate about a platform, and use what’s fundamentally their own to make a difference in research and learn things about themselves that are going to be meaningful. It’s about ‘how can we all come together and do something so it’s going to change things for ourselves, or change it for our children, or others out there?’ Our goal is to really be that partnership between you and the entire research world, so we can move things forward much faster.”

Wojcicki also acknowledged the non-traditional approach 23andMe is taking. “We want to do things that are ultimately going to help researchers, but at the same time we’re definitely shaking things up a little bit!”

Sarcoma patients and survivors weren’t the only ones who appreciated this vision. As Brian, a family friend of a woman diagnosed with uterine leiomyosarcoma, put it, “you don’t have to be part of some subset or some disease — this type of research can be for everybody.”

“It’s exactly what I’ve been hoping for for ten years,” said Suzy, a 10-year leiomyosarcoma survivor. “I’m glad that there’s more community and more people coming together because there’s a lot of information to be shared. I’m hopeful that with strength in numbers, if we can get people to sign up and we can get information… for people like us, with rare cancers, this is what we need.”

To learn more about 23andMe’s Sarcoma research community or to join, please visit https://www.23andme.com/sarcoma. A video recap of Sarcoma Community Night is also available at that link.